At their 2022 hardware event, Amazon made a couple of announcements including the new Kindle Scribe.

The Kindle Scribe is a new Kindle tablet and Amazon’s answer to the remarkable 2.

“Kindle Scribe is the best Kindle we’ve ever built, creating a reading and writing experience that feels like real paper,” said Kevin Keith, vice president of Amazon Devices. “It’s inspired by the Kindle customers who have added billions of notes and highlights to books over the years, and it’s also ideal for reviewing and marking up documents, managing your to-do list, or doodling over a big idea. Plus, it offers all the Kindle benefits customers know and love—millions of books on demand, adjustable fonts, premium reading features, and weeks and weeks of battery life—with the benefit of a beautiful, large
display.”

The device has a 10.2-inch e-ink display with 300 PPI and includes a pen that can be used to write, highlight and more.

Amazon will be offering two pen options, a Basic pen and a Premium pen. Both support a variety of line widths, highlighter tools, and eraser tools. The Premium pen adds a dedicated eraser and a shortcut button.

The tablet charges over USB-C and the battery lasts for months.

Amazon has announced the next-gen versions of their Echo Dot speakers.

The new Echo Dot and Echo Dot with Clock retain the same small form factor but the speaker internals have twice the base.

“A true ambient experience is there to simplify your day-to-day life when you need it and fades into the background when you don’t. This generation of Echo devices are designed with this vision in mind,” said Nedim Fresko, vice president of Amazon Alexa Devices. “With the upgraded audio and compact form factors, each of these new devices gives customers more ways to make Alexa a seamless part of their day. And, with the new sensors and technology built into Echo Dot and Echo Dot with Clock, customers can have Alexa do even more on their behalf.”

In addition, the new Echo Dots can be used as a mesh Wi-Fi point for Eero routers. This adds around 1,000 Sq-ft of Wi-Fi coverage for your Eero router.

Amazon has unveiled a new version of their Echo Auto speaker. The device is much smaller and comes with five built-in far-field mics.

The new Echo Auto can easily be mounted via adhesive to your vehicle’s dash.

No Canadian pricing and availability have been announced yet. 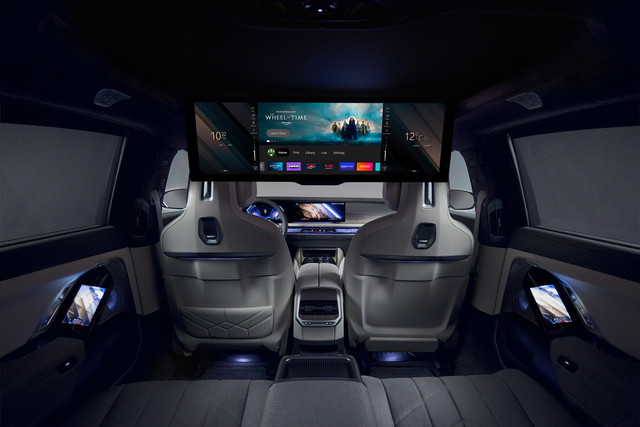 BMW and Amazon have partnered up to use Alexa custom assistant as the backbone for BMW’s next version of their in-vehicle voice assistant.

This is in addition to Fire TV powering the rear screen in the new BMW 7 series.

Amazon and BMW haven’t announced when this new Alexa-powered BMW voice assistant will be coming.

Amazon has announced a new version of their Fire TV Cube.

“The all-new Fire TV Cube is a big step forward for Fire TV—it’s the fastest, most powerful, and most versatile streaming media player we’ve ever made,” said Daniel Rausch, vice president of Amazon Entertainment Devices and Services. “This Fire TV Cube’s powerful processing and Wi-Fi 6E support deliver an incredibly smooth streaming experience, and HDMI input means you can instantly extend the simplicity of Fire TV and hands-free Alexa control to your home entertainment system. With Alexa Voice Remote Pro, we’re making it easy to find a misplaced remote and get to the apps and content
you love.”

It comes with a new fabric design and comes with Ethernet ports, USB ports, HDMI in and HDMI out ports.

Amazon is bringing the Fire TV experience to their Echo Show 15 display.

The free update will be coming to existing Echo Show 15 owners and you’ll get access to Prime Video and other streaming services.

You can go through the entertainment offerings on Echo Show 15 via your voice, the touchscreen or by pairing an Alexa Voice Remote.

“We’ve all been buying so-called smart TVs for decades, but they’re really not all that smart—and for much of the day, they’re not beautiful or useful either,” said Daniel Rausch, vice president of Amazon Entertainment Devices and Services.
“The Omni QLED Series delivers stunning artwork, glanceable information, hands-free controls, and so much more–it reimagines what customers can expect from a smart TV.”

The new Fire TV Omni QLED TVs are launching in Canada and the US with pre-orders starting today.