With the Galaxy Z Flip4, it marks Samsung’s fourth entry in their Z Flip series which was first launched in 2020.

At first glance, the Galaxy Z Flip4 doesn’t look that different from its Z Flip3 predecessor from 2021. The overall design of the Z Flip4 takes cues from the company’s design language of an aluminum frame and glass back that has been featured on most of Samsung’s flagship phones.

The Z Flip4 feels great in the hands and is easier to hold thanks to the brushed matte finish on the back of the phone. This helps make the phone not slip out of your pocket as easily and when holding it.

For the display, the Z Flip4 has a 6.7-inch FHD+ Dynamic AMOLED 2X Infinity Flex screen with a 120Hz adaptive refresh rate. Like Samsung’s other phone displays, the Z Flip4’s screen looks great thanks to its true black levels and high colour accuracy.

One thing that will take getting used to is how tall the phone is. Since the Z Flip4 is a flip-style foldable instead of the book-style Fold4, the screen unfolds upward and gives it a 22:9 aspect ratio.

Most other Android flagships are a 19:9 aspect ratio which makes them not as tall as the Z Flip4. Even for someone like me, I have larger hands and have gotten used to bigger phones but the Z Flip4 feels a bit tall for me, even when used with one hand.

It almost feels like looking at a handheld version of the display featured on Samsung’s TVs. When the Z Flip4 is folded, you have quick access to a 1.9-inch Cover Screen that can show you the time, notifications, and music and be used as a camera viewfinder.

It would have been nice if Samsung added a bit more functionality to the Cover Screen or made it larger, but there’s the possibility that a larger front display in the next Galaxy Z Flip device.

One benefit of the folding display is that Z Flip4 has support for a Flex mode that lets you fold the phone at the halfway point to then use as a tripod or watch videos.

On the side of the phone, you’ll find the fingerprint sensor/power button as well as the volume controls.

Powering the Z Flip4 is the Snapdragon 8+ Gen 1 chip along with 8GB of RAM and up to 512GB of storage. Using the phone in most use cases such as watching videos, and scrolling Twitter and TikTok had no issues.

Thankfully, the Z Flip4 also supports Super Fast Wired Charging (25W) to get you 0% to 50% in 30 mins or so, there’s also 25W Fast Wireless charging on supported chargers.

Other specs of the Z Flip4 include Bluetooth 5.2, IPX8 water resistance, so it should withstand some rain, as well as Wi-Fi 6.

The Galaxy Z Flip4 comes in several colours including Bora Purple, Graphite, Pink Gold and Blue. There’s also a Bespoke version of the Z Flip4 that lets you customize the colours and adds colour options like navy blue, white and yellow. 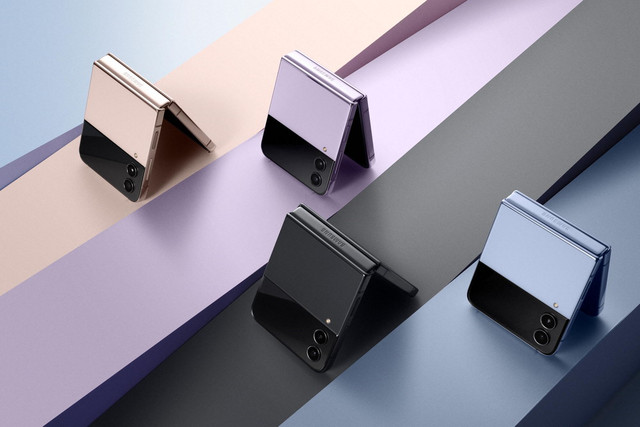 For the review unit, Samsung sent the Bora Purple colour of the Z Flip4 and it looks great.

Canadian pricing for the Z Flip4 is as follows:

This memory upgrade deal is available on Samsung’s website and Best Buy Canada.

On the software side of things, the Z Flip4 is running OneUI 4.1.1 based on Android 12L.

Android 12L is a special version of Android that Google made with foldables in mind like the Z Flip4 and Z Fold4.

From the looks department, this version of OneUI looks similar to previous versions. But it does bring some features from the stock version of Android 12 which is a more customizable design to the UI.

One example is that whenever you set a new wallpaper, you’ll get the option to choose a colour palette based on the colours in your wallpaper.

Other features of OneUI 4.1.1 are performance profiles that let you prioritize battery life over performance. There are two profiles to choose from, Standard which provides a balance between processing speed, battery life and cooling efficiency.

The other mode is Light which prioritizes battery life and cooling efficiency. This mode will especially be helpful since the battery in the Z Flip4 isn’t that large in capacity.

As mentioned earlier, the Z Flip4 supports Flex Mode which activates when you fold the screen at the halfway point. This can be used for things like watching videos, or as a camera tripod.

Also in the Flex Mode, you can use a feature called Flex Mode panel which lets you have an app at the top of the screen and the bottom half of the screen will have extra controls like a Notifications panel shortcut, screenshot, brightness, volume and a trackpad.

Samsung had previously announced that the Galaxy Z series would get four generations of One UI updates (i.e Android versions) and five years of security updates. This means that the next major update for the Z Flip4 should be OneUi 5 based on Android 13 which should be available in the coming months.

For cameras, the Z Flip4 has a 12MP ultra-wide and 12MP wide angle on the rear and a 10MP selfie camera.

The camera app on the Z Flip4 is just like other Samsung phones and feels straightforward to use.

Photos taken on the Z Flip4 were great with a good amount of details in each image. One benefit of the Z Flip4 and its cover screen is that it can be used as a preview for taking selfies or just for your subject to see themselves.

While the Z Flip4 does feature a Night mode, it is not the absolute best and can sometimes be slow.

Videos shot on the Z Flip4 also look good and can be shot in up to 4K 60fps. Videos usually have a good amount of detail and it’s fun to fold the Z Flip4 halfway and hold the phone like it’s a modern take on a camcorder.

Overall, the Galaxy Z Flip4 is a good device for someone who’s looking to dip their toes into the world of folding phones but doesn’t want to pay the higher price tag of the Z Fold4.