During their First Look event, Samsung has taken the wraps off their 2021 TVs including their Neo QLED and Micro LED.

“During the past year, we have witnessed the pivotal role technology played in helping us carry on with our lives and stay connected with each other,” said JH Han, President of Visual Display Business at Samsung Electronics. “Our commitment to an inclusive and sustainable future goes hand-in-hand with our relentless pursuit for innovation to meet consumers’ ever-changing needs – from reducing the carbon footprint of our products, to providing a suite of accessibility features, to offering an unparalleled viewing experience that fits each user’s lifestyle.”

Samsung is expanding its QLED display technology with its new Neo QLED.

Quantum Mini LED is 1/40 the height of a normal LED and uses thin microlayers that house more LEDs to better disperse light.

The difference with the new processor is that it has enhanced upscaling capabilities via 16 different neural network models to best optimize picture quality to 4K and 8K.

The 2021 Neo QLED 8K TVs will offer a new Infinity One Design, which is nearly bezel-less providing more screen. The TV will also come with a Slim One Connect box that can attach to the back of the TV.

All of Samsung’s 2021 TV lineup comes with a new solar-powered remote that has a solar panel on the back. It can be recharged by indoor, outdoor light or via the USB-C port.

Samsung hasn’t announced when their 2021 TVs (including the Neo QLED) will be available but they’ll be coming later this year.

In addition to the Neo QLED, Samsung also announced their new Micro LED lineup of TVs.

The company says this is the first time they’ve made Micro LED available in a traditional TV form factor for consumers.

The Micro LED lineup is available in 99- and 110-inch screen sizes. The benefit of Micro LED is that it uses micrometer-sized LED lights. 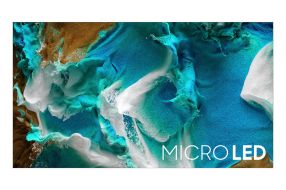 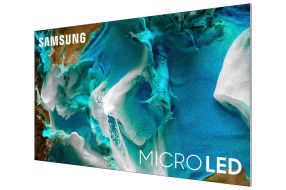 Another advantage of the Micro LED line is the 4Vue (Quad View) feature that lets you watch up to four different content sources at once.

The Micro LED TVs also have Majestic Sound which delivers 5.1 channel sound without any external speakers.

No pricing has been announced for the Micro LED TVs but they’ll be available by the end of the year.