As mentioned in my Jurassic World Evolution review, I’ve been a fan of simulation games, especially ones about managing theme parks. There’s something exciting about getting to build your own theme park from scratch, designing crazy rollercoasters and basically becoming your own Walt Disney.

While it’s been a few years since Planet Coaster initially launched, and now Frontier has brought the game to consoles.

If you’ve played any management simulation games like the RollerCoaster Tycoon series or even Frontier’s Jurassic World Evolution, then the Planet Coaster: Console Edition will very familiar to you.

Essentially, you’ll be put in charge of your very own theme park, you get control of the ticket and ride prices, where rides and attractions are placed and more. The game feature three different modes, Career, Sandbox and Challenges.

While the game was initially developed for PC when it first launched, Frontier was able to adapt the game for consoles. To move around the park, you use the left analog stick and camera on the other.

The bottom of the screen is where you’ll see the different objects and attractions you can add to your park from coasters, flat rides, scenery and more. To switch between the different sections, you’ll press LB and RB, and holding X and the D-pad to change how fast time progresses.

Once you’re finished with your coaster creation, the game does feature a ride cam so you can see what your guest see. 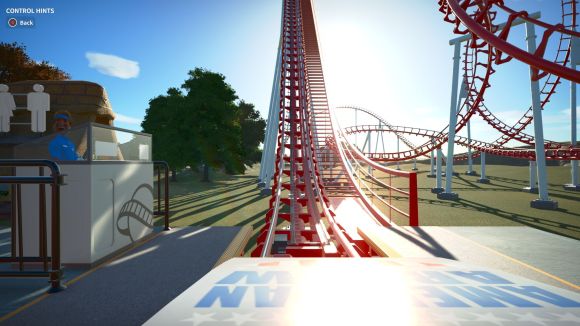 If you come into any issues with the controls, a layout of the game’s controls is shown on the pause menu. The game also supports mouse and keyboard for those that prefer a more PC-like experience. 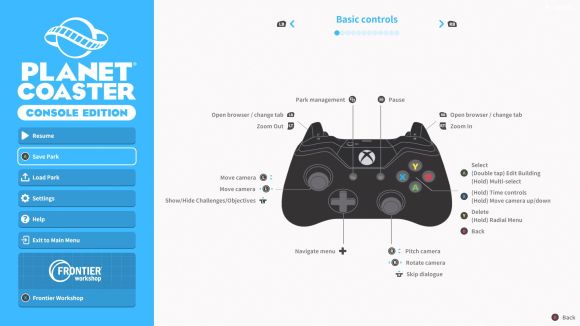 The look and feel of the interface are very similar to the PC version but there are some slight issues. Like when you’re in one of the men selecting a specific scenery object, you can search for it but there’s not a clear button indication of what to press to bring the search.

Even when you do get to the search bar, sometimes the game doesn’t let you select the object out of the results. It would be great if there was an option to have a cursor to easily select an object.

Another issue that’s also present in the PC version is how the path placement system works. Most of the time it works well but there are other times where you’re trying to connect an exit to an attraction to the park’s main path but it’ll think it’s being placed at an angle. 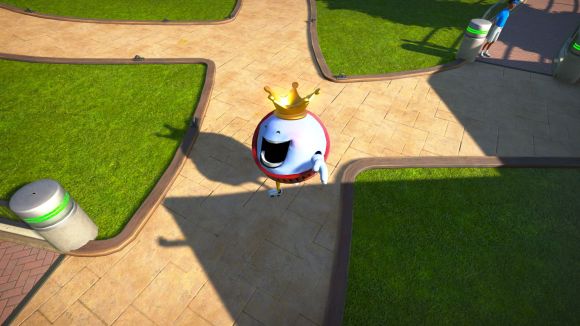 After completing challenges, you’ll be a bronze, silver or gold star rating. And you’ll need a certain amount of stars to unlock more challenges. Another thing to note is that as you progress, the difficulty of each scenario also increases, going from Beginner and Easy to Medium and Hard. While the game’s Career Mode does act as a sort-of tutorial, sometimes it doesn’t explain how to achieve some objectives clearly. For instance, the game will tell you to boost the scenery for the park but only certain objects will work. 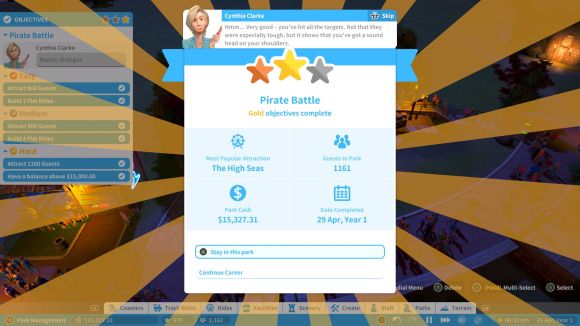 Sandbox is where you can have your imagination run wild and create the theme park of your dreams. You get unlimited money to spend on your park and you can add user-created content from the Frontier Workshop for even more creations to add to your park.

The Challenge Mode is similar to the Career but you’ll be given a specific amount of funds and need to overcome a number of hurdles such as costly ride breakdowns, flighty guests and more. There are 4 difficulty levels, achievements to earn and a number of challenges to complete.

The PC version was particularly graphically intensive but the game ran smoothly on the Xbox One X.

Visually Planet Coaster: Console Edition looks great, the game is very vibrant and features a very unique art style that is reminiscent of the Thrillville series (also by Frontier Developments).

The game is running at 4K resolution with HDR on Xbox One X and PS4 Pro. For this review, I played the game on the Xbox One X. 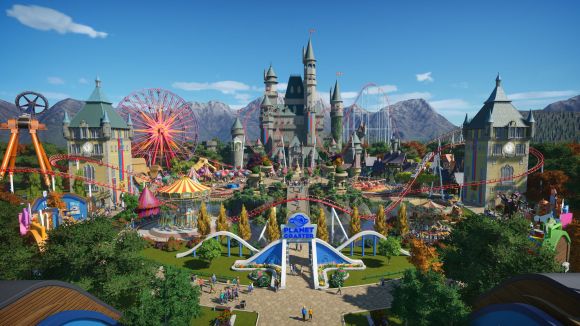 Planet Coaster: Console Edition is a great overall that brings the experience of the original PC version to a bigger screen.

There’s also a free next-gen upgrade for those going from Xbox One to Xbox Series X & S and PS4 to PS5.

An Xbox One review code of the game was provided by the game’s publisher and developer, Frontier Developments.