Apple made a couple of announcements at their September 10th event including the new iPhone 11 Pro & 11 Pro Max, iPhone 11, Apple Watch Series 5 and details about Apple TV+ and Apple Arcade.

“iPhone 11 Pro and iPhone 11 Pro Max are the most powerful and advanced smartphones we have ever made. They are packed with sophisticated technology that pros can count on to get their work done, and for anyone who wants the very best device made, even if they are not a pro,” said Phil Schiller, Apple’s senior vice president of Worldwide Marketing. “iPhone 11 Pro has the first triple-camera system in iPhone and is far and away the best camera we’ve ever made, it provides our customers with great range of creative control and advanced photo and video editing features in iOS 13. The Super Retina XDR is the brightest and most advanced display in iPhone and the A13 Bionic chipsets a new bar for smartphone performance and power efficiency.”

The iPhone 11 Pro has a 5.8-inch screen that Apple calls Super Retina XDR which is support HDR, and used OLED display technology. It has a resolution of 2436-by-1125 pixels.

The bigger iPhone 11 Pro Max has a 6.5-inch Super Retina XDR display, HDR support but with a resolution at 2688-by-1242 pixels. Both models have a max brightness of 800 nites and 1200 nites with HDR enabled.

As with most Apple products these days, the iPhone 11 Pro & Pro Max has the company’s True Tone technology, which automatically adjusts the screen depending on the lighting situation.

Both iPhones are IP68 water and dust resistant, powered by Apple’s A13 Bionic chip with a third-generation Neural Engine.

As for the cameras, Apple has introduced a triple-lens setup, one Ultra Wide, one Wide and one Telephoto, all are 12-megapixels. You can record video at up to 4K at 60fps. The TrueDepth Camera sensor returns, so you can use it for Face ID unlock and Apple Pay.

There is wireless charging support in the iPhone 11 Pro and 11 Pro Max.

New for this year is the inclusion of an 18W adapter in the box, so you can get up to 50% charge in 30 minutes. But the new phones still have the Lightning connector.

Pricing for the new iPhones are below:

The iPhone 11 Pro and 11 Pro Max will go on sale on September 20th with pre-orders beginning on September 13th. Both devices come in Space Gray, Silver, Midnight Green and Gold colour options.

The iPhone 11 is essentially Apple’s successor to the iPhone XR from last year.

“iPhone 11 is the next generation of iPhone, packed with great new capabilities in an incredible design, including new Ultra Wide and Wide cameras for gorgeous videos and photos, the power and ease of use of iOS 13, and A13 Bionic — the fastest chip ever in a smartphone that quickly handles the tasks that matter most to people every day,” said Phil Schiller, Apple’s senior vice president of Worldwide Marketing. “With the tight integration between hardware, software and services, the advancements in iPhone 11 bring an unparalleled user experience at an affordable price to even more customers. We think people will love it.”

The iPhone 11 has a 6.1-inch Liquid Retina HD Display that has a resolution of 1792-by-828 pixels and uses LCD and IPS technologies. You still get True Tone support but no HDR and a max brightness of 625 nits.

Powering the iPhone 11 is the A13 Bionic chip and the device is IP68 water and dust resistant.

In terms of cameras, the iPhone 11 only comes with two, one Ultra Wide and one Wide. Both lenses are 12-megapixels and support the new Night Mode.

The TrueDepth camera for Face ID is still featured on the iPhone 11. Apple says the new iPhone 11 lasts about an hour longer than the iPhone XR and there’s wireless charging.

While the iPhone 11 doesn’t come with an 18W charger, the phone still support fast charging but you’ll need to buy a compatible charger separately.

The iPhone 11 comes in a wide variety of colours including Black, White, Green, Yellow, Purple and (PRODUCT)RED. 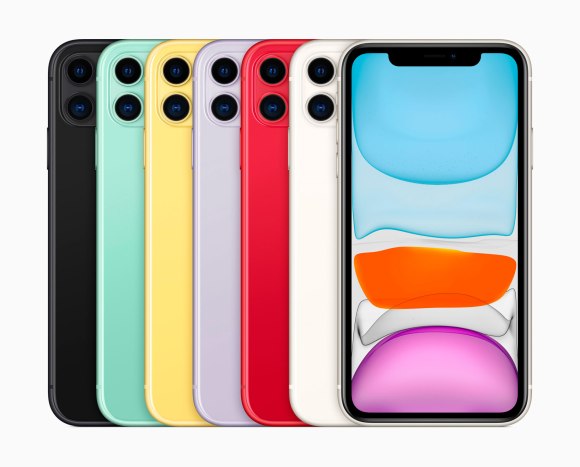 Pricing for the iPhone 11 are below:

Apple has refreshed its more affordable iPad by giving it a 10.2-inch Retina display that has a resolution of 2160-by-1620 pixels and 500 nits of max brightness.

“The new iPad packs even more value into our most popular and affordable iPad model featuring a bigger 10.2-inch Retina display, support for Apple Pencil and for the first time, the full-size Smart Keyboard,” said Greg Joswiak, Apple’s vice president of Product Marketing. “The new iPad was built to run iPadOS, which introduces powerful new ways to multitask, manage and mark up documents, use Apple Pencil and view more information at a glance on a redesigned Home screen. This new iPad with iPadOS takes everything people love about our most popular iPad and makes it even better for creating, learning, working and playing.”

Just like the previous model, the new iPad supports Apple Pencil (the 1st Gen Lightning-based one).

The iPad has an 8-megapixel camera, stereo speakers and uses Touch ID. Apple says you can expect up to 10 hours of battery life on the new iPad.

It also comes with iPadOS which is a version of iOS that was made specifically for the iPad and all its features.

iPadOS will rollout to iPad Air 2 and later, all iPad Pro models, iPad 5th generation and later, and iPad mini 4 and later on September 30th.

Pricing is listed below

The Apple Pencil will cost an addition $129 CAD and the Smart Keyboard for the new iPad is $219 CAD.

The new Apple Watch Series 5 now comes with an Always-On Retina display, so you can see the time and other info. You can expect up to 18 hours of battery life even with the Always-On display enabled.

The Apple Watch Series 5 is running watchOS 6 which brings period-tracking (via the Cycle Tracking app), Noise app and direct access to the App Store from your watch. 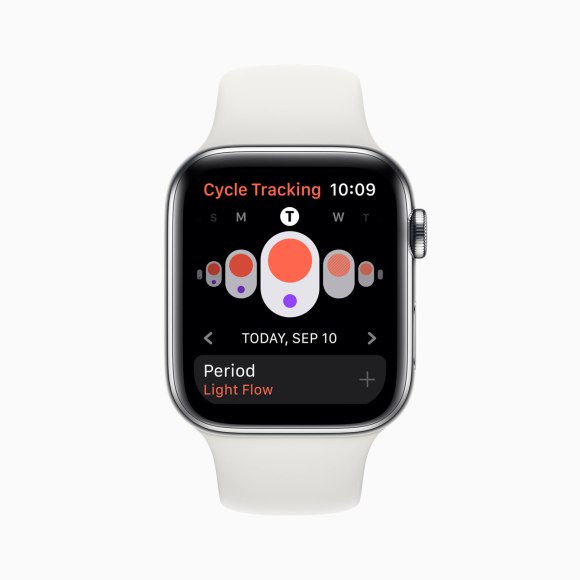 The new Watch Series 5 is available in a titanium case material in two brushed finishes, natural and space black.

Apple is also launching the Apple Watch Studio, where customers can pick their favourite case and band combination for a more unique look. 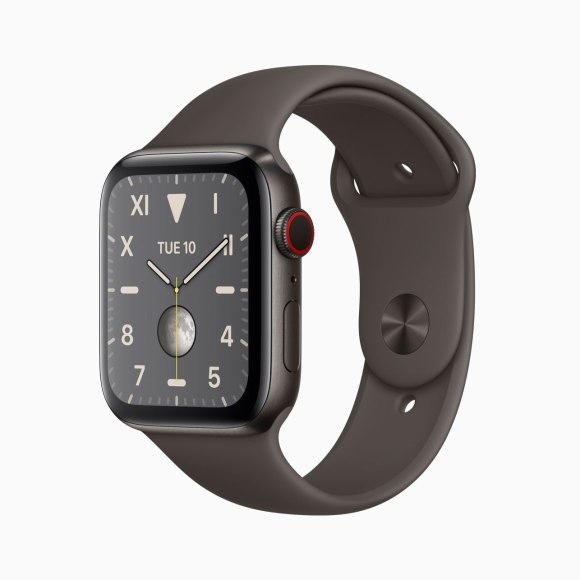 The Apple Watch Series 5 will launch on September 20th with pre-orders beginning today.

The Apple Watch Series will now start at $259 CAD and $389 for the GPS only and GPS & Cellular option respectively.

Apple Arcade gives users access to more than 100 new and exclusive games including all the updates, expansions and no ads or in-game purchases.

Some of the titles come to Apple Arcade include:

The service will be available more than 150 countries via a new tab in the App Store on iOS, macOS and tvOS. 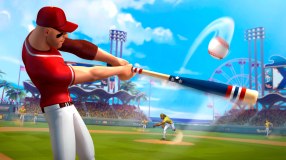 All games included in Apple Arcade can be played offline and a single subscription includes access for up to six family members (via Family Sharing).

The new service will be just one tap away via the App Store in iOS 13.

It’ll cost $5.99 CAD ($4.99 USD) per month when it launches on September 19th. There will also be a one-month free trial available for Apple Arcade.

The company also announced details about when their Apple TV+ video streaming service will be launching.

“With Apple TV+, we are presenting all-original stories from the best, brightest and most creative minds, and we know viewers will find their new favourite show or movie on our service,” said Zack Van Amburg, Apple’s head of Worldwide Video. “Each Apple TV+ original offers its own unique story, fresh perspective and powerful message — all meant to entertain, connect and inspire cultural conversations.”

Here are some of the Apple TV+ Originals launching with the service:

More original content will be added to Apple TV+ in the months after launch including:

You’ll be able to watch Apple TV+ Originals both online and offline via downloads in the Apple TV app on iPhone, iPad, Apple TV, iPod Touch and Mac with macOS Catalina.

In addition to Apple’s own devices, the Apple TV app will be coming to Amazon Fire TV, LG, Vizio and Sony smart TVs and Roku devices. The app is already available for Samsung 2018 & 2019 TVs.

The service is set to launch in more than 100 countries (including Canada) on November 1st and cost $5.99 CAD ($4.99 USD) per month with a seven-day free trial.

And starting today, if you purchase any new iPhone, iPad, Apple TV, Mac or iPod Touch, you’ll get one-year free of Apple TV+.

[…] has done the same with the new iPhone SE. The device uses the A13 Bionic chip found in the iPhone 11 series from last […]

[…] part of the iPhone SE’s camera could use some work is in low-light situations. While the iPhone 11 models gained a new Night Mode, the iPhone SE sadly did […]

[…] the speaker is Apple’s S5 chip, which is the same one found in the Apple Watch Series 5 last […]

[…] been just over a year since Apple launched its subscription service and it originally launched apps for Roku, Fire TV, Samsung, LG and Vizio […]