Back in 2017, a company by a name of Pi announced the world’s first contactless wireless charger and was set to be released in 2018.

But 2018 came and went and their Pi charger wasn’t released. For the past 18 months, the team has been hard at work and today they are rebranding themselves at Spansive.

CEO & Co-Founder John MacDonald said in a blog post, “Spansive is from the root expansive. It means growth, expansion, and action. There is nothing metaphorical about our new name. Our team is growing, our business is expanding, and we are about to ship our first product.”

In the months since the Pi charger was first shown off, MacDonald says the Spansive team has been working on two different wireless power platform which can be used for a number of applications from headphone manufacturers to automakers.

MacDonald also said that their upcoming consumer product won’t be the cone-shaped wireless charger they unveiled in 2017. Instead, it will have a convenient place to rest multiple phones to charge. He also said you won’t need a special case to use the charger, all you’ll need is a device with the Qi wireless charging standard.

MacDonald didn’t go into a lot of detail about the upcoming product but he did say “Expect a Qi-compatible experience that unlocks the real value of the wireless charging already built into your phone. Expect our cutting edge magnetic field-shaping technology hidden in a beautiful design, perfect for your kitchen, living room, bedroom, or office. Expect the best family and shared space power source in the world.” 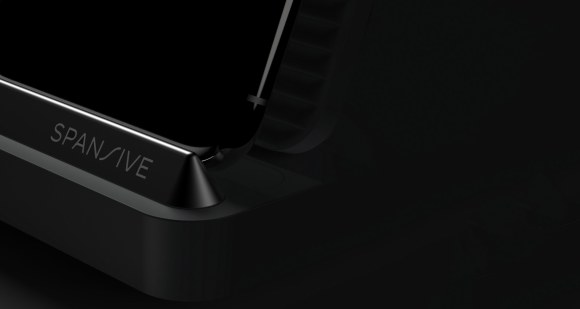 Spansive’s first product is set to be shown off in the coming months, according to MacDonald and you can sign up for their email list to be the first in the know.