All pre-orders of Red Dead Redemption 2 will come with the following:

In addition, digital pre-orders of the game will also include:

The Red Dead Redemption 2: Special Edition will come with the game and a physical version of the game’s world map. Along with exclusive content for the Story Mode.

One is a new bank robbery mission and a gang hideout that you can take over. You’ll also get a dappled black thoroughbred horse and an exclusive Nuevo Paraiso Saddle. There’s also gameplay boosts, cash bonus, discounts, a Nuevo Paraiso Gunslinger outfit and free access to additional weapons such as the volcanic pistol, pump action shotgun and Lancaster varmin rifle.

The Red Dead Redemption 2: Ultimate Edition includes everything that comes with the Special Edition but also bonus outfits for your online character, a Black Chestnut Thoroughbred horse, free access to the Survivor Camp Theme, weapons and rank up faster. 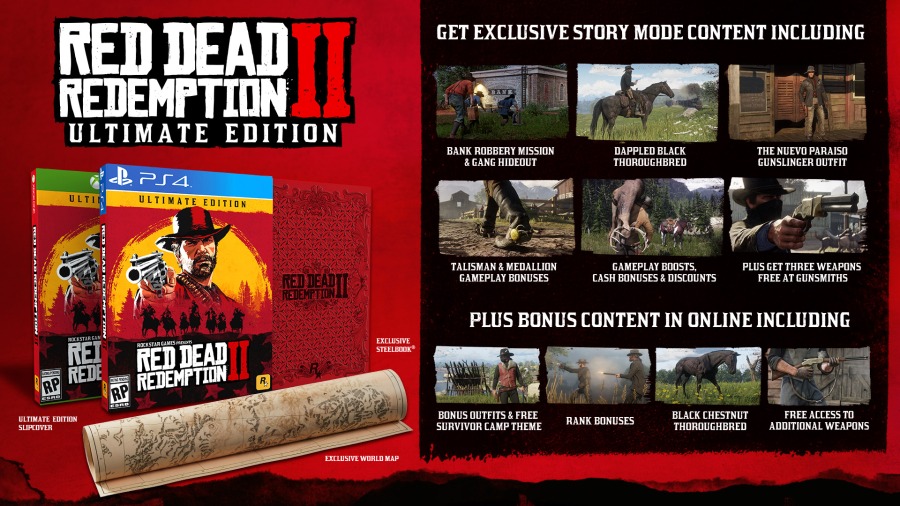 The Collector’s Box does not include Red Redemption 2, that is sold separately.

All three versions of Red Dead Redemption 2 are available for pre-order from the Rockstar Warehouse and various retailers.

The Canadian pricing as follows: