Headphone jacks have been a big part of smartphones since the beginning. But as more device manufacturers decide to get rid of the headphone jack, their users are going to have to rely on a pair of Bluetooth headphones or earphones.

And ever since Apple introduced the AirPods last year, you’re going to be seeing a lot more wireless earphones like Anker’s new Zolo brand name and product line. The first product under the new brand is the Zolo Liberty+ wireless earbuds and even though the Kickstarter for the product just launched a few days ago, they’ve already blown past their goal of $50,000 around 12 times.

The biggest claim to fame that Zolo is making is their “breathtaking audio fidelity” which uses a lab-created material called Graphene that is 100 times stronger than steel. The Graphene is used to create a dynamic driver to help create “an astonishing improvement in sound quality.”

Zolo also says their Liberty+ earbuds have a “virtually unbreakable” Bluetooth connection, which uses a Satellite LDS Antenna to do this. They also come with Bluetooth 5.0, which offers a bigger range and double the data transmission speed.

The Liberty+ earbuds are super easy to setup, which Zolo has simplified to two simple steps: Push and Go. The earbuds will automatically connect to your device when you remove the from their case after the initial pairing process.

And once you’re done, the earbuds will shut off when you put them back in their case. You can expect up to 3.5 hours of music playback and the charging case can give you more than 48 hours of extra playtime, the case charges over microUSB.

The Liberty+ earbuds can also connect to your favourite voice assistant, with support for Alexa, Google Assistant, and Siri. Connecting to Alexa is controlled via the Android and iOS app but Google Assistant and Siri will instantly be accessible with two taps of the earbuds.

The earbuds also come with something that Zolo is calling Transparency Technology, which can allow you to get “exceptional sound isolation” from the world around you. With the help of the external microphone, you can easily hear exterior sounds.

The Zolo Liberty+ have a hydrophobic nano-coating, so you can easily take it out in the rain or the gym. The earbuds also come with Zolo’s GripFit technology, so the Liberty+ is guaranteed to fit your ears.

The Zolo Liberty+ earbuds are available in black or white and in the box, you’ll get the 1) earbuds, 2) the charging case, 3) 4 GripFit Jackets, 4) 3 EarTips, 5) microUSB cable. 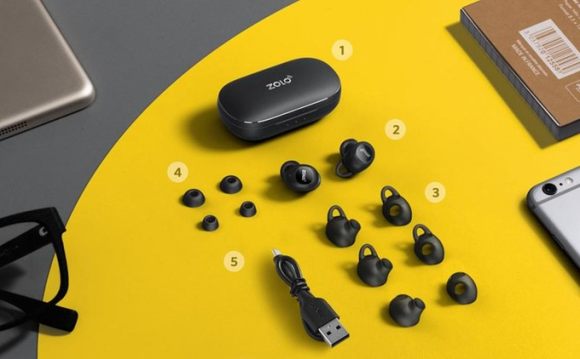 The Kickstarter pledges are as follows:

The Liberty+ earbuds are scheduled to ship in October 2017.

[…] Source: Anker is serious about audio with the Zolo Liberty+ wireless earbuds – TheCanadianTechie […]