Bragi, the fully wireless headphone brand, has just announced two new models to replace the original Dash, with the Dash Pro and the Dash Pro tailored by Starkey Hearing Technologies.

The Dash Pro comes with “professional grade” Bluetooth connectivity, so users will get their audio “without interruption”, one of the biggest problems that the original Dash faced, was connection issues. You’ll also get five hours of battery life on a single charge using the carrying case that can charge the earphones up to 5 times, for about 30 hours of battery life. There is also 4GB of internal storage in the Dash Pro.

The Dash PRO contains more than 150 micro-components, a 32-bit processor, artificial intelligence powered by Dash AI and 27 sensors, all in a package about the size of your fingertip. Those sensors help ignite Bragi’s unique Kinetic User Interface, which enables users to literally turn their body into the device with a tap of the cheek or a nod of the head through the Virtual 4-D menu.

Setting up the Dash Pro is much easier, with one-touch setup with Android, Apple or Windows devices within seconds. There is also a new audio transparency feature that will allow you to hear your surroundings or cancel it all out. You can also expect stronger bass, a new advanced audio codec and new foam tips.  The Dash Pro has also comes with offline storage of workout training and a waterproof design.

The Dash Pro also comes with iTranslate support which is directly integrated into Bragi OS 3. You’ll be able to translate conversations in real-time. iTranslate has support for 40 languages.

The Bragi Dash Pro retails for $329 USD and is available from Bragi’s website in one colour option, black.

The Starkey version of the Dash Pro is “the world’s first custom-made wireless ear computer.” Basically, the Starkey model is custom-molded to better fit in your ears and uses the same process that audiologists use for hearing aids and in-ear monitors. The Starkey version of the Dash Pro will only be available on of 5,000 audiologists across Canada and the US. They will retail for $500 USD and come with a special case with a Starkey gold leather inlay inside. 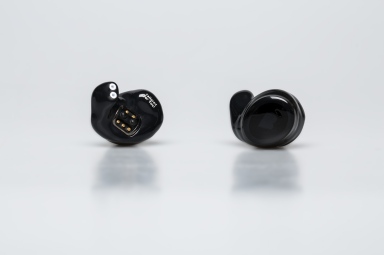 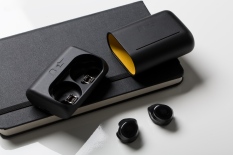 “The Dash Pro tailored by Starkey and The Dash Pro are the most intelligent devices of their kind, representing incredible advancement and achievement over the last 18 months,” said Bragi Founder & CEO Nikolaj Hviid. “These magical devices have seamless Bluetooth pairing and connectivity, a longer-lasting battery life and groundbreaking achievements like real-time language translation powered by iTranslate, a 4D menu allowing users to go hands-free and integration with IBM Watson’s famed AI. We’re excited to enable people to do more.”