Back in November of last year, Motorola put out a call to developers and entrepreneurs to help create the next generation of Moto Mods with their “Transform the Smartphone Challenge” in partnership and on Indiegogo.

Motorola has announced the finalists who received a Moto Mods Development Kit and a Moto Z, and are set to launch their Indiegogo campaigns. Motorola says they received over 700 submissions from 55 countries and 30 states.

Some of the Moto Mods ideas that are launching on Indiegogo range include a notification lighting Moto Mod called Edge, of which there are two models ,the Edge Force which adds a 2,000 mAh battery and the Edge Air which adds wireless charging.

The perks for the Edge Moto Mod start at $55 USD + shipping (the $49 Super early bird is already sold out) and that gets you the option of the Edge Force or Air model. It’s set to ship to backers in July. 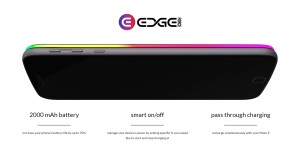 The next Moto Mod that also just launched on Indiegogo is called the “Ultimate Moto Z Mod with Wireless Charging”, as you can tell by the name, this Moto Mod adds wireless charging.

But it also ads infrared emitters, so you can control things such as your TV or set-top box. All of this comes in the same size package as the existing Moto Style Shells (or maybe slightly thicker).

There is about 6 other campaigns that just launched and their Moto Mod ideas range from adding a solar powered battery pack, a Walkie Talkie, a Smart Wallet and there are more launching in the next few weeks.

After the Indiegogo campaigns have finished, Motorola will choose ten grand prize winners based on their campaign’s originality, commercial viability, overall use of the Moto Z Mod platform and crowdfunding success.

The grand prize winners will receive a trip for two to Chicago to show off their idea to the Moto executive development team. They’ll also be mentored and receive expert guidance from the Moto Mod development team.

If the winners are able to impress the team, they’ll get an investment from Lenovo Capital (up to $1 million) to help bring their Moto Mods ideas to market. You can find out more about the Transform the Smartphone Challenge here.